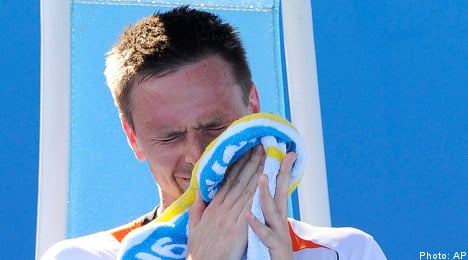 The 27-year-old will also miss the Grand Slam events at Roland Garros and Wimbledon prior to the London Games.

“The Olympic Games are always special. It’s not that it’s difficult to miss a particular event but that I really want to replay,” said Söderling who did not indicate when he would return.

“I really want to return, I’m not 28 years yet and I hope to still have many years (to play),” he added.

The former world number four has not competed since mid-July when he won in Båstad – his fourth title of the season after Brisbane, Rotterdam and Marseille.

A short time later, however, he was forced to drop out of the US Open due to illness and has yet to return to form.

Söderling is also a two-time French Open runner-up, having defeated defending champion Rafael Nadal in 2009 before succumbing to Roger Federer in the finals.

The following year he beat Federer, ending his record streak of 23 consecutive Grand Slam semifinals, before eventually losing to Nadal.

He is currently ranked 65th in the world, down from his career best ranking of 4th, which he reached in November 2010.

Söderling also announced earlier this spring that he and his girlfriend are expecting their first child in September 2012.