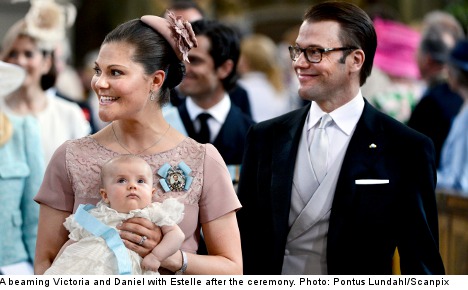 The plush Christening ceremony in a flower-decked Royal Chapel was carried out by Archbishop Anders Wejryd in the presence of the Swedish royal family, along with a number of other European royals, dignitaries and members of the Swedish government, including Prime Minister Fredrik Reinfeldt.

Dressed in the baptismal gown once worn by her mother and her grandfather, King Carl XVI Gustaf, the three-month-old princess, whose full name is Estelle Silvia Ewa Mary, did not cry but gurgled a bit when Wejryd poured water over her head.

Her uncle Prince Carl Philip of Sweden and aunt Anna Westling Söderström, the sister of her father Prince Daniel, along with Norway’s Crown Prince Haakon, Dutch Crown Prince Willem-Alexander and Danish Crown Princess Mary, had been named her godparents and stood near the baptismal font during the ceremony.

Crown Princess Victoria, wearing a dusty-rose dress and hat matching her mother Queen Silvia’s outfit, then cradled a smiling Estelle in her arms as the king decorated the young princess with the Order of the Seraphim, which is given exclusively to members of the Swedish royal family and some foreign heads of state.

Born on February 23rd, Princess Estelle also carries the title of Duchess of Östergötland and is the first child of 34-year-old Victoria and her husband Daniel, 38, who was born a commoner.

Beyond celebrating the baptism of a child likely to grow up to one day be queen of Sweden, commentators were especially interested in two non-royal guests at the ceremony: Prince Carl Philip’s girlfriend Sofia Hellqvist and Princess Madeleine’s American boyfriend Chris O’Neill.

Tuesday marked the first time either was invited into the royal fold, and royal connoisseur Johan Lindwall speculated in the Expressen daily’s online edition that Victoria’s fairytale wedding with Daniel had made it easier for other commoners to be accepted as possible additions to the family.

“Today’s baptism is in many ways historic,” he said.