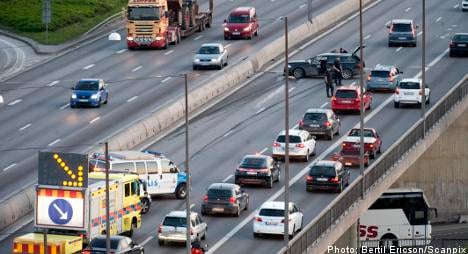 It is believed that the thieves’ objective was to take the contents of the armoured vehicle, wrote the Aftonbladet newspaper.

The men rammed their own car into the armoured vehicle around 8.30pm on Tuesday night near Fredhäll in west Stockholm.

However, their own car was no match for the larger vehicle, and after the crash the men left their own car and made a run for it.

Witnesses saw three men, and told the paper that they were masked and carrying at least one automatic weapon.

The men fled the scene on foot. Soon after, a passing car was hijacked at gunpoint in a nearby area, which police assume was directly related to the crash on the highway.

“A person lost their car at gunpoint and the offenders left the scene in this car,” said Ulf Lindgren of the Stockholm police to Aftonbladet.

Some 20 police patrols and a helicopter were sent to the area, yet the men were not caught.

Meanwhile, the men’s own car was left on the highway, badly damaged from the ramming.

While no-one was injured in the melee, police are still unsure of the offenders’ whereabouts.

“We don’t know where they’ve gone but know what car we’re looking for,” Lindgren told the paper.

An investigation into aggravated robbery is underway.