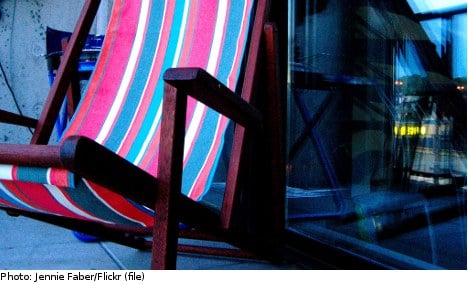 The sun lounger in the picture is not the one mentioned in the article.

“I saw that her paper hadn’t been brought in and I thought ‘what on earth has happened’,” said a neighbour to daily Kvällsposten.

The elderly woman had stepped out on her balcony on Saturday to enjoy the warm weather which swept across Sweden in recent days.

Planning to make the most of the beautiful day she sat down on her sun lounger. But suddenly the fabric of the chair broke, causing the woman to fall through.

Despite repeated attempts to free herself from the lounger fabric’s grip, the octogenarian found that she was stuck in a position from she couldn’t extract herself unaided.

After the woman failed to turn up at church on Sunday, her friends started to get worried, reports Kvällsposten.

“When I heard that I knew immediately that something had happened, she hasn’t missed a church meeting in years,” said chairwoman of the tenant’s association board Lilian Orrgren to the paper.

By Monday afternoon her friends and the other residents in the building started to worry something was really wrong and called the caretaker.

The caretaker called Orrgren, and together with another association board member they entered the 84-year-old’s flat with a skeleton key, according to the paper.

Well in the flat, they found the helpless octogenarian on the balcony, held prisoner by the broken sun lounger.

She was reportedly conscious and, considering the circumstances, was holding up well.

The 84-year-old was subsequently taken to the local hospital, however, where she was treated for minor injuries, according to the paper.