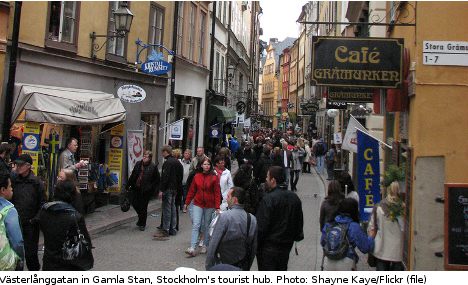 Ninety percent of the 16.7 million foreign tourists who came to Sweden last year were happy with their stay, according to a study presented on Wednesday by the Swedish Agency for Economic and Regional Growth (Tillväxtverket).

“By looking at what they do, how much money they spend, what kind of accommodation they choose, where they have been and so on, you can refine the product and market it right,” said the agency’s Therese Lindberg to Sveriges Radio (SR).

The study consists of over 20,000 interviews at Swedish border stations, conducted when visitors were leaving the country.

The study showed that the majority of visitors to Sweden come from neighbouring nations Norway, Denmark and Finland, which made up 61 percent of the total number of visitors.

Ten percent of visitors came from Germany and 80 percent of all those that came were returning visitors.

The study also showed that Norwegians are prone to visit western Sweden, Danes prefer the south and Finns like to frequent Northern Sweden and the Stockholm area.

The majority of the visitors, some 90 percent of all the study’s participants, were pleased with their stay. Least pleased were the Germans, of which 9 percent stated that they were not happy with their stay.

The study, however, did not account for why this was the case.

“We can look at what they did, where they stayed, what activities they took part in and so on. But we cannot draw any real conclusions from this general question about being pleased with their stay,” said Lindberg to SR.