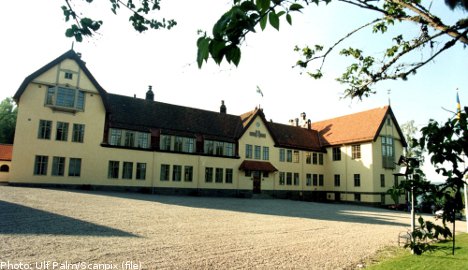 One student, Jan-Åke, told of being kicked so hard that his anus split, leaving him incontinent for the rest of his life.

He also suffered hearing loss after having a rifle fired close to his ear.

“I’ve never cried as much as I did at Lundsberg,” he told the SVT programme, which documents decades of student-on-student abuse at the elite boarding school, the alma mater of Prince Carl Philip and a host of other members of Swedish high-society.

Last November, the school, located in rural Värmland in western Sweden, was reported to police over allegations that a student had his nipples burned as part of an elaborate and controversial “peer education” system whereby older students are tasked with educating younger ones.

The practice has been part of the Lundsberg experience for decades and when several examples were brought to the attention of vice principal Stefan Kristoffersen, he approached the school’s board of trustees, but no action was taken.

In one anonymous letter sent to Kristoffersen, a student told of being orderd to “eat manure”. He also said other students forced him to perform oral sex as part of an initiation ritual.

“Peer education is a bit like ‘Lord of the Flies’. When the lights go off, these tendencies get activated in student living quarters,” he told SVT.

Kristoffersen presented several letters to the school’s leadership detailing student abuse, but no action was taken, prompting him to resign in protest.

The school has also refused to pay compensation to a student who enrolled in 2009 and was subsequently bullied while at Lundsberg.

Despite an order by Sweden’s Child and School Student Representative (Barn- och elevombudet – BEO) that the school pay the student 178,400 kronor ($24,700) in damages for the abuse he suffered, the school’s leadership rebuffed the decision, claiming the boy “exaggerated” his claims.

The SVT investigation is set to broadcast at 8pm on Wednesday night.