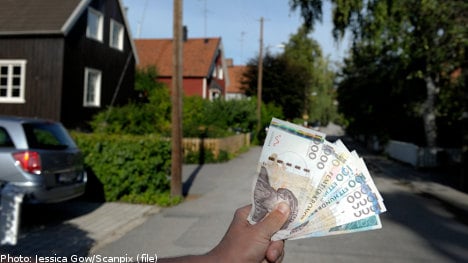 When a woman dropped the impressive contents of her bag on Tuesday afternoon, local Ystad residents rushed to her aid and helped gather the banknotes as they were seemingly raining from the sky, wrote the Sydsvenskan newspaper.

However, in the madness, the woman who dropped the money slipped away, leaving bamboozled residents with handfuls of cash.

Upon realizing that the woman had legged it, the cashed up good Samaritans decided to give the money to the local police, a sum of some 13,000 kronor.

Just ten minutes prior to the flying money, police had been notified of a 90-year-old woman that had been robbed of 100,000 kronor – all in one thousand kronor banknotes. The woman had also been robbed of gold jewellery.

“She let in two women who said they wanted to see how a two roomed house looked like in the residency. One of the women went out on the balcony, while the other went into the bathroom,” said Stefan Mårtensson of the Ystad police to the paper.

It was when the two women had left the house that the elderly woman realized she had been robbed.

Police suspect a connection between the two incidents, and are yet to identify any suspects in the theft.

It remains unknown exactly how much cash the woman dropped on the streets of Ystad, or what became of the other 87,000 kronor.