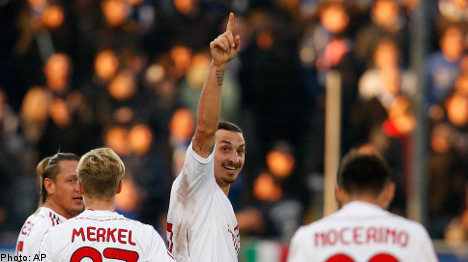 “At Milan, the problem is the club’s economic situation but I will respect my contract,” Ibrahimovic said at Sweden’s pre-Euro 2012 training camp in quotes picked up by the Italian media.

“I will return to training with Milan in July. But at the moment the club does not have the means to go out and buy the five players they need.”

“Two players have been brought in thus far (Bakaye Traore from Nancy and Riccardo Montolivo from Fiorentina), perhaps a third one will arrive.”

“The more we play together, the more we will improve. Look at Chelsea, who were not the strongest team but still won (the Champions League),” added Ibrahimovic, who was the leading scorer in Serie A in the season just finished with 28 goals.

Questions had been raised about Ibrahimovic’s future following posts from a Twitter account that were attributed to him.

“I don’t use Twitter. Whenever a new transfer window opens people always talk about me,” he said.