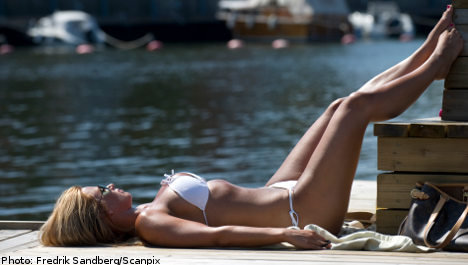 The mercury touched 29.8 degrees Celsius in Falun in central Sweden, the highest May temperature since records began in 1860.

“It’s not often we have such high temperatures in May, but it happens now and then,” Linnea Rehn at Sweden’s meteorological office SMHI said.

Most of the country was basked in sunshine, with the warm weather set to continue until at least Monday, according to SMHI.

Linnea Rehn explained that there is a cold front poised to push in from the north, but that won’t be until at least Tuesday.

“On Tuesday, the cooler air will also have reached southern Sweden and the temperature will end up around 15 degrees Celsius,” Linnea Rehn confirmed.

The weather will however be more unstable during the week and in some northern areas rain and snow falls could be expected.

“This weekend, just take the opportunity to enjoy.”