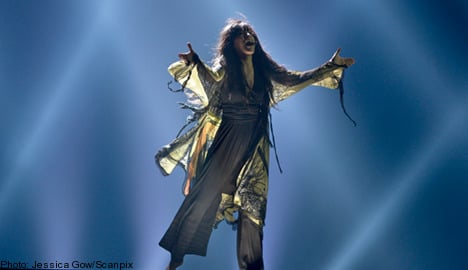 Loreen received a total of 372 points in the competition, with 18 countries awarding her the maximum allowable 12 points.

“I want to say that I love you so much and thank you for believing in me,” an emotional Loreen said before taking the stage for her victory encore performance of “Euphoria”

“I wouldn’t have been able to do it without you. This is ours together,” she added in thanking her fans and supporters.

The 28-year-old singer from Västerås in central Sweden had been tipped as a possible winner ahead of Saturday’s final, but faced stiff competition from her European peers, including runners-up Buranovskiye Babushki, a group of singing grannies from Russia, as well as Serbian crooner Željko Joksimović, who finished third.

But as the voting entered its final stages early Sunday morning, it became clear that Loreen would return the Eurovision crown to Sweden for the first time since 1999 when Charlotte Nilsson won with “Take Me to Your Heaven”.

In an interview with one of the hostesses during the counting of the votes, Loreen said that her message to all those that voted for her was that of love.

However, she didn’t know what to do should she turn out to be the overall winner.

“I don’t know yet. Cry, perhaps,” Loreen said and smiled.

Loreen has been in the hot seat during her stay in Azerbaijan for meeting with human rights activists while in the country.

After getting through to the final on Thursday, Loreen was asked about her meetings and why she had chosen to meet with these groups.

“There are two sides to me, one is private and one is as a journalist. Right now I want to focus on the positive energies created tonight,” Loreen said in answer, reported Nöjesbladet at the time.

“Euphoria”, written by Thomas G:son and Peter Boström, won Sweden’s Eurovision qualification contest, Melodifestivalen, in March and has dominated the country’s airwaves ever since.

The wins means that Sweden will host the Eurovision Song Contest in 2013.