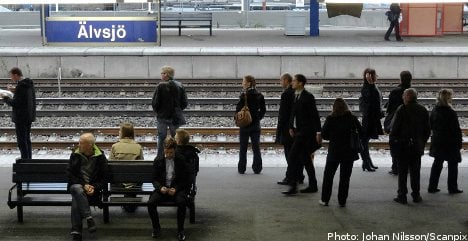 “We think it’s unreasonable. It’s clear that it’s inefficttive that we’re putting more time into sitting still in queues instead of being free or working,” said Maria Rankka, the CEO of Stockholm’s Chamber of Commerce (Handelskammaren) to the Svenksa Dagbladet (SvD) newspaper.

The average commute time in the greater Stockholm area is 34 minutes each way, according to a study carried out by engineering consultancy WSP at the behest of the chamber.

The report points to the public transport’s low average speed as a reason to why it takes so long for Stockholm residents to travel between their homes and the office.

Taking public transport means a commuter will be travelling on average 20 kilometres an hour, whereas car drivers can enjoy an average of 36 km/h.

In addition, the study revealed that taking the car is no longer considered to be the status symbol it once was, and attractive office locations in the city are likely to be closer to train stations than car parks.

“Because there is a continuing growth in travel and as space is limited, there must be a growth in public transport. It’s an effective way to travel, especially on the metro, and many people want to use it,” she told the paper.

An expansion of the Stockholm metro lines has been listed as the most important future plan for the chamber of commerce, plans which include extending the green line to Nya Karolinska and Solna, just north of Stockholm.

“It’s in the metro that one should invest the most money. Many people can travel with it and in a city that’s growing, it gives a large capacity in the transport system when one invested under the ground,” she told SvD.