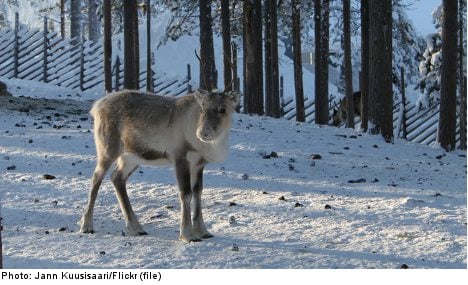 The reindeer in the picture is not the reindeer mentioned in the article.

“It’s been a real crap spring. We’ve had bad years before but then there have been some bits of the mountain without snow cover. At the moment there is a still lot of snow in the mountains and we are really worried how this will work out,” said Mikael Jonsson, head of Rans Sámi village to local paper Västerbottenskuriren (VK).

Herders fear that the cold will mean one of the worst calving seasons in living memory. Jonsson has worked with reindeer for over 25 years and he can’t remember a year with worse conditions than this.

“I have already started finding dead reindeer calves on the mountain,” he told VK.

And just how bad it is going to be will be impossible to say before July, when the new calves are branded. Before then the reindeer cows must be left in peace or there is a risk that they will leave their young to the perils of the mountain.

One of these is the natural predators of the mountain, foxes and birds of prey. According to the paper, the last years’ record numbers of rats and field-mice have increased the predator population on the mountain.

When these have depleted the excess of rodents, they turn to the new-born calves, if given a chance, reports the paper.