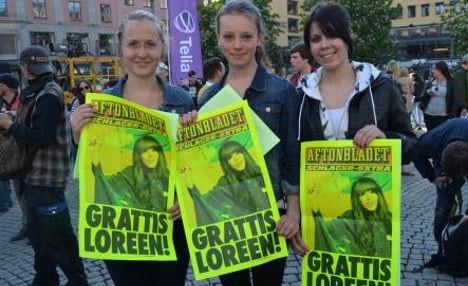 While the rest of the world scratches their heads about “those crazy Europeans”, Swedish media is suffocated – in no small part thanks to “Melodifestivalen”, a six week “Idol” like series of nationwide concerts to determine the best entrant to send to Europe.

While the rest of the world may be laughing, Sweden takes it seriously and reaps the glory. The Stockholm mayor is already excited about the possibilities for the capital city after the last Eurovision in Stockholm reportedly earned the city 77 million kronor ($10.8 million) in tourism turnover.

Sweden has strengthened its ties with world music and with Eurovision ever since Abba’s unusual costumes and funny guitars put the country on the pop-music world map forevermore in 1974.

And since, Sweden’s attention has concentrated into giving its absolute best possible song to the Eurovision contest, which this year resulted in Sweden winning with the second-highest point total in the contest’s history.

After the competition on Saturday, Loreen gave an interview to Sveriges Television (SVT) where she was asked why she thought people had voted for her.

She responded that it was thanks to the message she sent in her performance (let’s be honest, it wasn’t the message in the lyrics).

“I don’t use much make-up and I’m barefoot. I think people long to be allowed to be as they are,” she responded.

It’s a fair point; she didn’t use sex to sell her song. None of the winners did. Russian grannies finished in second place and a middle-aged Serbian man came third.

However, I’m not entirely sure it had so much to do with Loreen herself, sex appeal or not.

She looked like a barefoot ringwraith, her dancing wasn’t spectacular (though the crab shuttle certainly raised a few eyebrows where I was watching), and with all the flailing hair and the heavy fringe, it was hard to even see her face.

Plus it was mostly in the dark.

It was an entertaining performance for sure, but by Eurovision standards where magic and acrobatics are the norm, it was nothing special.

So if sex, glitz and glamour took a back seat, why did Loreen win by such an enormous margin?

Why? Quite simply because she performed what all the evidence suggests is a fantastic song. This, I hasten to add, is not the typical Eurovision’s winning formula (see Azerbaijan’s winning entry last year).

“Euphoria” swept the world, long before the fever of Saturday night. It was the international favourite to win, provided Europe didn’t fall for the dancing grannies from Russia.

Bookies in the UK even called off betting on Sweden after a resounding response when the odds became as short as 5/4.

In Sweden, it was madness. Nightclubs embraced the song for a dance-hungry crowd. And the clubbers lapped it up – not because of national pride or Euro fever… simply because the song was irresistibly catchy.

Soon at The Local, we started getting more Loreen love from around the world. The wildlife park adaptation from the UK was a particularly unique example. Some kids from as far as New Zealand sent us their own adapted version of the song too.

Meanwhile, “Euphoria” reached the top five of the iTunes charts in five countries. Euphoria was big news, very big news for an entrant in what some may say is a silly music competition.

But deep down, that should be what it’s all about right? The song.

There was little doubt that the song itself would take Sweden up-up-up-up-up-up-up to the voting charts to the top for Sweden’s fifth ever win.

Every single voting country (besides Italy) gave points to Sweden, with 18 of them giving Loreen the top score of 12 points. Even the voters most irritated by the “neighbour helping” voting layout could accept that the best song won – for a very pleasant change.

Is Loreen the deserving winner? Sure.

But is “Euphoria”, the song itself, the real deserving winner of Eurovision Song Contest 2012?

All the evidence suggests a resounding yes. 12 points.

What do YOU think?