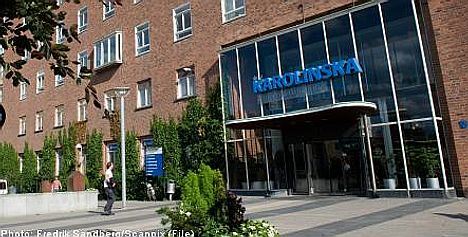 Karolinska Universtity Hosptial in Solna, north of Stockholm, continues to have confidence in the doctor despite the fact that he knew he was infected with the virus that causes AIDS when he had unprotected sex with several partners.

The doctor never divulged his condition to his partners, one of whom later tested positive for HIV.

Following his conviction for endangering the life of another, the doctor was initially sentenced to ten months in prison, a punishment that was later reduced to four months.

The National Board of Health and Welfare (Socialstyrelsen) is currently examining whether the doctor should be stripped of his licence to practice medicine in the wake of his conviction.

But in a letter written to the health board, Karolinska’s Chief Medical Officer Ann-Britt Bolin Wiechel argues that the doctor has “support from me and my highest management” for continuing to work at the hospital after serving his sentence.

The doctor has written that he has no plans to appeal the verdict and that he, in his capacity as a doctor, has never taken any risks or lacked judgment in carrying out his duties.

But in an anonymous letter sent to the Dagens Nyheter (DN) daily, a group of Karolinska employees expressed their concerns about management’s efforts to allow the doctor to keep working at the hospital.

The group labeled as “unethical and irresponsible” the move to allow the HIV-positive and convicted doctor to continue at Karolinska.

“How would patients and their families react when being treated by a doctor who so recklessly showed that he neglected the very essence of human dignity?” the letter reads.

The National Board of Health and Welfare is expected to issue a ruling on the matter with a few weeks, according to DN.