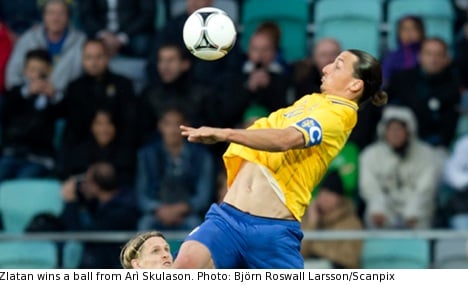 “It was a good game, it felt good for me and it has felt good all along. Of course it was a pity we let two goals through but that happens in a game like this,” star striker Zlatan Ibrahimovic said to news agency TT.

The start of the match belonged to the Swedes completely with Sweden taking the lead 2-0 after just 13 minutes.

Ibrahimovic opened the scoring in the first minute with a beautiful volley on a pass from Sebastian Larsson.

Ibrahimovic also had a hand in Sweden’s second goal, tricking Icelandic defender Hallgrimur Jonasson by dribbling left then right with his right foot, before deftly passing with his left to Ola Toivonen by the far post.

Teammate Emir Bajrami was highly complimentary about Zlatan’s efforts in the opening minutes of the game.

Ibrahimovic himself was also pleased about his efforts.

But then things slowed down and Sweden began to fail to make headway from midfield, enabling Iceland’s Kolbeinn Sigthorsson to pull back the deficit to 2-1.

Iceland, coached by Sweden’s former manager Lars Lagerbäck, recovered somewhat after the early Swedish domination but a slew of second half substitutions put an end to any hopes of going further on the offensive.

Instead, Christian Wilhelmsson, who replaced Ibrahimovic in the 62nd minute, took a Pontus Wernbloom pass and upped Sweden’s lead to 3-1 on a half volley.

In the final minute, Iceland’s Hallgrimur Jonasson reduced the arrears to 3-2.

Swedish goalkeeper Andreas Isaksson played a full match and seemed unfazed by a sore shoulder that has bothered him lately, and Andreas Granqvist, who played instead of groin-injured defender Mikael Lustigs, put in a strong showing.

Head coach Eric Hamrén told TV4 Sport after the game that he was pleased with the result.

“As a whole I am ham happy with it. There was a lot of good stuff in our attacking play,” he said.

Sweden’s Euro 2012 preparations continue next week with a home match against Serbia on Tuesday.

Sweden has been paired alongside England, France and co-hosts Ukraine in Group D at Euro 2012, which runs from June 8th to July 1st in Poland and Ukraine.