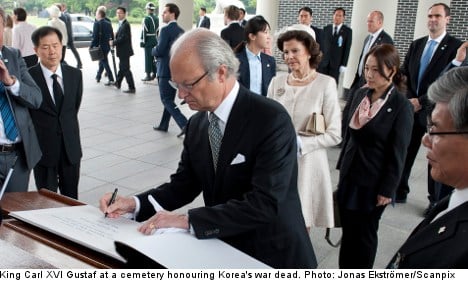 Officials from Sweden and Switzerland have served with the Neutral Nations Supervisory Commission at the border village of Panmunjom since the 1950-53 Korean War ended with an armistice instead of a full peace treaty.

The two European nations – which did not send combat forces during the war – was designated by the United Nations Command to observe and maintain ceasefire conditions.

The king, making his first state visit to South Korea this week, will visit the tense border area Friday to meet Swedish officials there.

“We are very proud that we are still here… we need to stay as long as needed,” the king said, adding Stockholm was looking forward to an improvement in cross-border relations in the future.

About 1,000 Swedish officials in total have served for the past six decades as part of the commission in the demilitarised buffer zone straddling the border, he added.

Sweden has diplomatic missions in both Koreas, which technically remain at war. Cross-border ties have been icy since the North’s alleged sinking of a Seoul warship and its deadly shelling of a South Korean border island in 2010.

He made five personal visits to South Korea from 1987 to 2008 before this week’s state occasion.