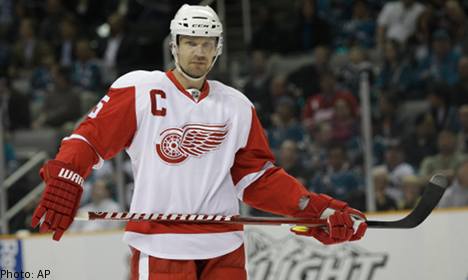 The 42-year-old Red Wings captain was a member of four NHL Stanley Cup championship squads and a seven-time winner of the Norris Trophy for the NHL’s top defenseman in a season.

“Nick has been a Rock of Gibraltar for us. He has just been a solid winner.”

Lidström, a four-time Olympian who helped Sweden win Olympic gold in 2004 at Torino, said he no longer had the fire to commit to the off-season training needed to perform in the NHL.

“I know what I have to do to get ready for a long year,” Lidström said.

“I’m not willing to sacrifice that to have a good summer or take it easy. I know what I have to do and it’s a grind to go through. It takes a toll on you.”

Lidström scored 264 goals and assisted on 878 others in 1,564 NHL regular-season games — 10th on the all-time NHL games played list and fifth among defensemen — and 54 goals plus 129 assists in 263 playoff games.

He finished this past season with 11 goals in 70 games.

“The current team I believe is a very solid team,” Lidström said. “We didn’t get it done this year, but I believe we have a solid core.”

Lidström was named the NHL playoff Most Valuable Player during Detroit’s 2002 title run and in 2008, two years after becoming the Red Wings’ captain, he became the first European player to serve as captain of a Stanley Cup-winner.