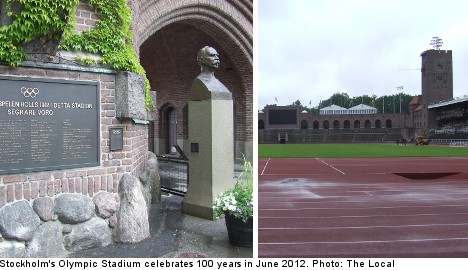 And on June 9th, Stockholm will bid good luck to Sweden’s Olympians departing for London with a festival of sport.

The day will see visitors able to try out Olympic sports, as well as being able to find out more about the historic 1912 Stockholm Olympics.

The stadium is the oldest Olympic arena still in use today, with athletic meets still held on the track, and with concerts and events able to cater for up to 33,000 spectators.

Stockholm football’s Djurgården also uses the facility as their footballing home, at least until they re-locate next year.

On Friday, a new plaque was unveiled to commemorate the stadium’s 100-year anniversary, and for Stockholmers, there is certainly a sense of pride for their Olympic venue, which will continue hosting athletics meets going into its second century in operation.

“It means a lot for the Swedish people to have a stadium still in use today, 100 years after its inception,” 70-year old Lars told The Local at the unveiling of the stadium’s new plaque.

“We still stage great athletic competitions here, and it is still such a beautiful piece of art. It is not like any other stadium in the world; it is typical to Stockholmers and we are all very proud and excited to have it.”

On June 1st, 1912, the stadium, designed by architect Torben Grut, was inaugurated as an official venue for the Olympic Games.

During the 1912 competition, it was used as a venue for the tug of war, equestrian, gymnastics and wrestling, as well as the traditional track and field events.

Since then the stadium has gone on to host a varied range of events, including the European Athletics Championships, and bizarrely hosted the Olympic Equestrian Event for the 1956 games in Melbourne, due to quarantine laws in Australia.

A total of 87 world records have been set in the arena.

Today, the stadium stands as a proud reminder of Sweden’s more glorious sporting years, as well as being a lasting tribute to the most traditional of sporting constructions.

Jean, 34, from France, who was on hand for Friday’s ceremony, hailed the stadium for its enduring design and rich history.

“It’s a beautiful stadium with a unique history,” he told The Local.

“It certainly has a lot of character to it, much more than the modern stadiums we see built today, like the Stade de France for instance.”

UK-native Ian, 35, will run the track of the stadium as part of the Stockholm Marathon on Saturday.

“It’s more like a castle than a stadium, and nothing like anything that we would see built today. I’m looking forward to finishing here as this is a fantastic and completely unique Olympic arena,” he said.

On Saturday, 21,266 runners from 83 different countries are expected to finish the marathon with a lap around Stockholm’s classic Olympic stadium – the highest number of runners in the race’s 34-year history.