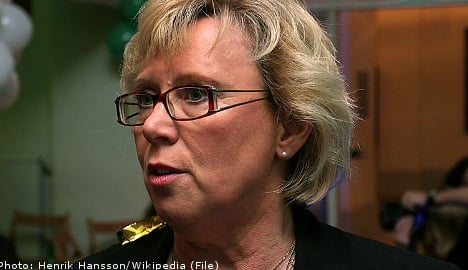 The unexpected visit occurred on Örjansskolan’s football field in Rönnskär, outside Skellefteå in northern Sweden.

The school’s principal was less than happy with the minister’s lack of notice.

“Nobody at the school knew anything about this, and we’re responsible for the children’s safety. It’s a risk when something like this occurs,” said principal Göran Lundmark to local newspaper Norran.

Minister Lena Ek was late for her visit to Boliden’s smeltery in Rönnskär, hence the unusual choice of landing.

“It was a last-minute solution with very short notice. I’ve spoken to the school, and we agreed that it was unfortunate that we didn’t inform them of our decision,” Ann Lundholm, press officer at the Rönnskär plant.

Boliden directed Lena Ek’s helicopter to the school as a landing spot, according to the environmental ministry’s Madeleine van der Veer.

Van der Veer was on the helicopter, and apologised for the commotion caused by the landing.

“We’re very sorry if we caused anyone to worry at the school, and we apologise for that,” she said to news agency TT.

Lena Ek was heading from a visit at LKAB’s mine in Kiruna when she landed in Rönnskär. In Rönnskär she participated at the opening of a new recycling plant.