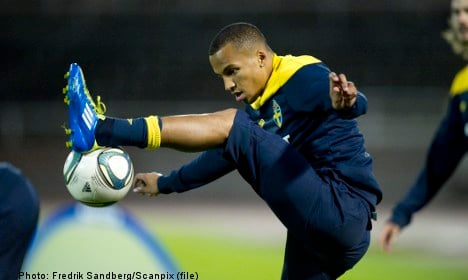 Having suffered the disappointment of relegation with Blackburn this season, it will be an opportunity to rebound quickly and, perhaps more importantly, put himself firmly in the shop window.

Olsson has allegedly already made it clear he doesn’t want to play in the second-tier Championship next season and several clubs in England and Europe have been alerted to his wishes, according to his agent.

European champions Chelsea are rumoured to be amongst his suitors as a potential replacement for Ashley Cole, when the England left-back eventually moves on.

Elsewhere Newcastle, Stoke City and Turkish giants Galatasaray are others to have expressed their interest.

But there could be a lot more offers, as well as better contracts dangled before his nose, should he shine in Poland and Ukraine next month.

And Olsson has everything necessary to do exactly that.

A pacey player, he can operate at either left-back or left wing meaning he is the kind of versatile player in the mould of Tottenham’s Gareth Bale, who can fit seemlessly into a number of formations.

Olsson’s pace is obviously a factor in making him an attractive option but his ability to switch between forward and defender will make him a vital weapon for Sweden.

He is nominally down as a defender in Sweden’s official tournament squad and given they are heavy in the midfield department he will likely play as a full-back.

Having the pair marauding down the same flank, one ahead of the other, could have provided a confusing challenge to the right side of any opponents.

It is probably a better idea to keep him in defence, though, as his goal scoring record at Blackburn certainly doesn’t compare to many other wingers: five goals in 109 matches is certainly a return befitting a defender.

Of course before he can shine for the Scandinavian outfit, he will have to earn his place in the side.

The 24-year-old only has eight caps and is by no means assured of a starting berth.

He will face stiff competition from Iranian-born Behrang Safari of Belgian side Anderlecht, who is three years his senior and has almost three times as much international experience.

However, given that Sweden are in the same group as England, Olsson could prove crucial in that match, given he is well accustomed to facing the best right-sided players the Premier League has to offer.