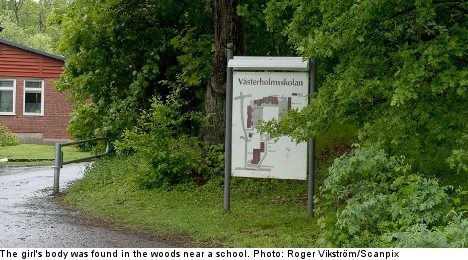 The girl, who was found dead on Thursday morning in a wooded area in Skärholmen, has been identified by Swedish media as Jassitha.

Initially, police suspected suicide, however new information has led investigators to suspect a murder which may have been set up to look like a suicide.

But following the completion of an autopsy on Monday, police are now returning to their original theory about the girl’s death.

“It shows that the death was probably not caused by a crime,” police spokesperson Hesam Akbari told the Svenska Dagbladet (SvD) newspaper.

Jassitha’s friends and family have spoken out about the death of the 17-year-old, who was found hanged in the woods near her home and had been missing for several days prior to the discovery.

“She was such a beautiful girl, she would never take her own life, she was so strong,” said Jassitha’s father to the Aftonbladet newspaper.

“She was my little girl, and the police must find out who has done this.”

He told Expressen that Jassitha was an accomplished student who dreamed of becoming a doctor.

Meanwhile, police continue to search for clues in the area where the girl was discovered, as well as interviewing friends and family of the girl.

The deceased girl’s boyfriend has revealed that a text message he received from Jassitha before her death said “See you in the next life,” wrote the paper.

The boyfriend also insisted that she would never have committed suicide.

One year ago, a relative of the girl was formally charged for several cases of aggravated assault and violation of integrity against the 17-year-old.

The relative was arrested and detained, yet despite the fact that the girl had given witness statements to police documenting her injuries, she retracted her statement in the court’s official hearing.

The relative was still convicted after having confessed to the crimes during the investigation and several witnesses had confirmed the story.

“We recognize the conviction, and have spoken with the relative after the girl’s death,” Ville Paloheimo of the Söderort police told the paper.

“We haven’t dropped the case as there are a few measures we need to complete before we can change directions or close the case,” Akbari told SvD.