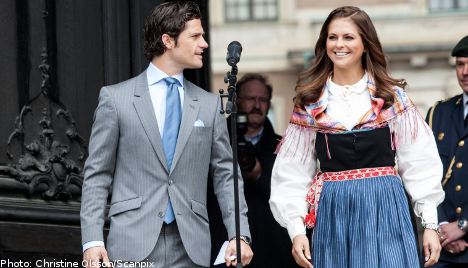 June 6th has been designated Sweden’s National Day and Swedish Flag Day and in most parts of central and southern Sweden revellers have been treated to mild and sunny weather.

From Uppland and to the north celebrations however had a distinctly wetter feel about them.

One of the features of National Day is ceremonies held at town and city halls across the country to welcome those who became Swedish citizens during the past year.

In Malmö, some 280 new Swedes were given a royal welcome at the opera house with Prince Daniel in attendance during the afternoon.

The day is typically a busy one for the royal family.

Prince Carl Philip and Princess Madeleine were on hand at 10am to open the doors to the royal palace in central Stockholm while the King and Queen spent the morning in Visby on Gotland.

The royals are then due to gather in Stockholm for a horse-drawn procession from the palace to the open air museum Skansen where official National Day celebrations will begin at around 6pm.

National Day and Swedish Flag Day is on June 6th due to recognise Gustav Vasa’s ascent to the throne in 1523. It furthermore marks the Instrument of Government which was adopted on this day in 1809.

National Day is typically a fairly low-key affair and has only been a national holiday since 2005.