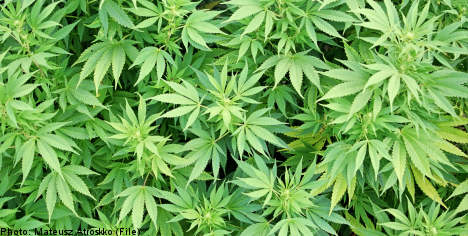 “A few years ago, we’ve found a few plants in closets and stuff like that, but now it’s not unusual for people to erect growing tents with hundreds of plants,” Jonas Wendel of the Stockholm police’s narcotics unit told the Metro newspaper.

According to police, easy access to growing equipment – which can be acquired legally and is increasingly sophisticated – has helped fuel the trend of home-grown weed in Sweden.

Nor is possession of the seeds from which cannabis plants grow considered a crime in Sweden, although a shop owner who sells the seeds could be charged with being an accessory to narcotics crimes.

Rather, it is only when marijuana plants emerge from the ground that they are considered a drug, according to Metro.

Wendel estimates that most of the marijuana smoked in Sweden is also grown in the country. Hashish, on the other hand, is most often smuggled in from abroad.

And as pot farming increases in popularity in Sweden, it appears that home-brewing of alcohol has lost its appeal.

“In the beginning of the 2000s home distilleries accounted for 3 percent of alcohol consumption in the country, while it now accounts for 1 percent,” Björn Trolldal of the substance abuse prevision group Stockholm Prevents Alcohol and Drug Problems (STAD) told Metro.

According to statistics from Sweden’s National Council on Crime Prevention (Brottsförebyggande rådet – Brå), the number of crimes related to home distillation has declined from 936 in 2000 to only 182 in 2011.