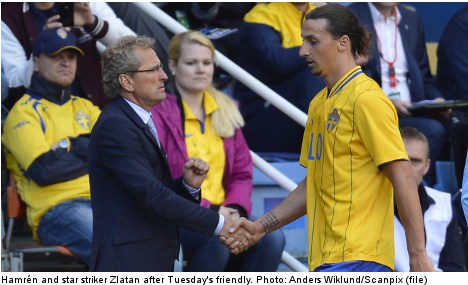 “We’ve played Ukraine three times in the last few years and we’ve won one, lost one and drawn the other. There’s not much between the two sides,” he told a news conference in Kozin, some 20 kilometres (12 miles) from the capital, Kiev.

The Swedish team arrived in the country on Wednesday, after a slight delay in landing due to a thunderstorm over the capital. They will be having their first training session on the Dynamo Kiev home ground on Thursday, and will face home team Ukraine on Monday 11th of June.

“They’ve got the support of the home country. That’s the reason why they’re obviously favourites,” for the Group D opener on Monday in Kiev, Hamrén added, noting that few host countries of major championships lose their first match.

Sweden will also play France and England in the group, with the Scandinavians coming into the tournament on a high after a 3-2 friendly win against Iceland and a 2-1 victory over Serbia.

“When the tournament starts, it’s a different story. But good preparation and good results makes you feel good. We feel good… we’ve had a good start. I’ve no complaints,” he said during the press conference.