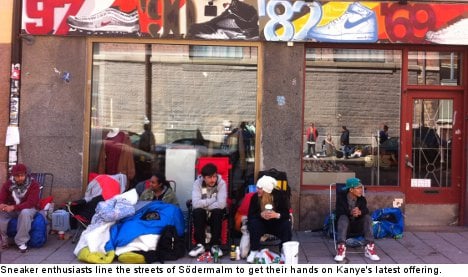 The “Kanye West Air Jeezy 2”, will be released at 2pm on Saturday at Sneakersnstuff, a shoe store in Södermalm, with each pair boasting a 2,599 kronor ($363) price tag.

Max and Patrick, who flew into Stockholm from Hamburg specifically for the event, are thrilled at the opportunity.

“This is the only shop we know of in Europe that’s selling the shoes in both colours – we’ve been camping here for two days,” they told The Local.

“While the Swedish sneaker scene is nowhere near as big as it is in Germany, we made the most of the chance to grab Kanye’s newest design here in Stockholm.”

Others have not been so lucky.

Arvid Landquist, an 18-year-old Stockholmer, was 26th in line and will miss out on the chance to take home a pair of the highly prized shoes by one place.

“I’m furious. The guy who was at number 17 went away for too long, he should be kicked out of the line. They only have room for 25 people. Now I am going to miss out, this is ridiculous,” he told The Local.

The store is only selling 50 pairs of shoes, and every customer has the right to buy two pairs.

According to a statement from the shoe store, there are only 3,000 pairs of the shoe available in the world, and some eBay sellers have already listed them for $4,000.

Meanwhile, store owners in at Sneakersnstuff are ecstatic about the interest in the shoes.

“We’ve been here for 13 years and this is the absolute coolest thing we’ve been in on. There’s not been such a big hype about a shoe for several years,” said store worker Olof Törnqvist to daily Aftonbladet.

“Some people collect stamps, while others like shoes. The fact that Kanye West is involved adds to it all too, of course.”

For 25-year-old Max from Hamburg, the chance to take home a pair of Jeezys will make the ultimate addition to his impressive collection.

“Yes, I guess you could call it an obsession. I’ve been collecting shoes since I got my first pair of skate shoes at the age of 12. I’ve sold a whole bunch of them, but I guess I own around 150 pairs now,” he said.