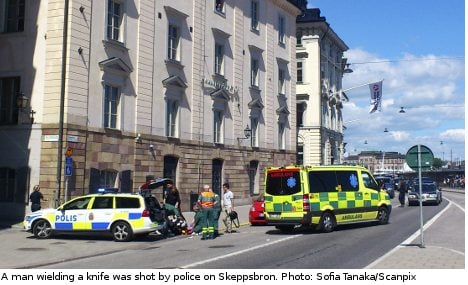 “He made lunges at me and was carrying a long knife,” a witness told news agency TT.

The witness said police fired three to five shots after a middle-aged man approached passers-by with a knife at Skeppsbron.

The man, who is allegdly born in 1976, ignored police orders to drop his weapon. After two warning shots, police officers shot the man in the leg.

“When the patrol came to the scene and talked to the man he ignored their commands,” said Ulf Lindgren of the Stockholm police to Dagens Nyheter (DN).

“Then, they fired warning shots to show the man that it was time to drop the knife. The man continued in the direction of police officers and they fired.”

The severity of the man’s injuries remain unclear and he was taken to hospital around 2pm on Friday afternoon.

Police are unsure if anyone else was injured during the ordeal.

“I have received no information if anyone has been injured by the man with the knife,” Lindgren told the paper.

Witnesses also noted that the man seemed to be under the influence of something.

Police cordoned off the area and traffic was at a standstill in the hours following the event.

According to Ann-Sofie Sommerdahl of the Stockholm police, an investigation is already underway.

“And there will be a hearing among the policemen involved,” she told TT.

Police have labelled the incident as attempted aggravated assault.