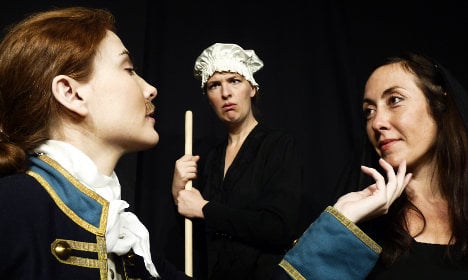 The troupe will present a potpourri of scenes and passages at two of Stockholm’s most spectacular outdoor venues.

They grace Hallwylska Palatset on June 14th for three nights of “Shakespeare at the Palace,” before moving on to the gardens at Observatoriemuseet for “Shakespeare on the Hill” on June 29th until July 1st, returning again on July 13th and 14th.

Preparations have been underway since January for the summer production and actor and co-producer Kristina Leon is looking forward to the challenge such an array of genres will present for the cast.

“We thought it would be more interesting for people of Stockholm to see the best of the bard, through his comedies, tragedies and sonnets combined together in one production,” Leon told The Local.

“As an actor it is this combination which is most exciting as it requires so many different energies. In one scene we may be playing male characters, in the next we may be female.”

The acting cast, Ingela Lundh, Cheryl Murphy and Kristina Leon herself will be looking to bring the traditions of Shakespeare to Swedish and English speakers alike in their outdoor show.

“Shakespeare, As You Like it” follows on from their production of Ted Hughes’ “Ovid” – a modern interpretation of a classical play the bard is said to have drawn much inspiration from.

“We are looking to create a production that a mixed audience of Swedish speakers, English speakers and tourists will be able to enjoy,” Leon told The Local.

“Shakespeare can be a challenge at the best of times for native speakers, but through our physical theatre accompanying some of the most well-known passages in English verse, we will be hoping that all will be able to enjoy the richness of the bard.”

The production is being directed by Italian Samuele Caldognetto, who moved to Sweden in 2009 and has since become the founder of SEST, along with Italian group, Teater Pi. The scenes will be collaborated with the live music of classical guitarist, Carl Bruno.

To win a pair of tickets for one of the Stockholm English Speaking Theatre Company’s productions this summer, be the first to send the correct answer to the following question to [email protected]:

Which of William Shakespeare’s plays is sometimes referred to by superstitious actors as “The Scottish Play”?

UPDATE: This competition is now closed