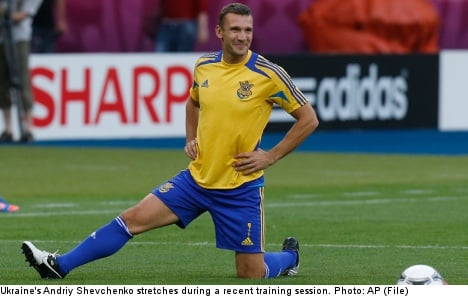 Sweden will have to overcome home advantage as they kick-off their Euro 2012 campaign in Kiev against a Ukrainian side that will doubtless be backed by a raucous and expectant set of supporters.

The co-hosts are a side missing their experienced goalkeeper Olexandr Shovkovsky, as well as key defender Dmytro Chygrynskiy.

Sweden will feel there will be plenty of areas for them to exploit, particularly if they can deal with the threat posed by Ukraine’s veteran talisman, Andriy Shevchenko.

The 35-year old was once the most feared striker in Europe, with Chelsea paying €43 million for him in 2006. However, after Shevchenko suffered several back injuries this season, Swedish defenders Olaf Mellberg and Andreas Granqvist will feel more confident of keeping the former Milan star quiet.

With automatic qualification to the tournament assured for the co-hosts, Ukraine have prepared for the tournament with a series of friendly games over the last year with generally disappointing results, including a 4-1 loss to France in Kiev.

Sweden have faced their opponents only 3 times previously, with their first meeting in 2008. They will certainly take confidence, however, from the 1-0 win they achieved in Kiev last August.

A 90th minute goal from Tobias Hysen was enough to give Sweden the win in the friendly game.

Monday night’s game promises to be a much more competitive and tense affair, however, with both teams perhaps seeing this as their most winnable fixture in the group stage, compared with games against France and England to come for both.

Sweden may feel that if they can deal with the atmosphere of the capacity home crowd, they will be able to deal with their opponents on the pitch.

A good result is crucial, however, if Erik Hamren’s men are to take some momentum into the rest of the tournament.