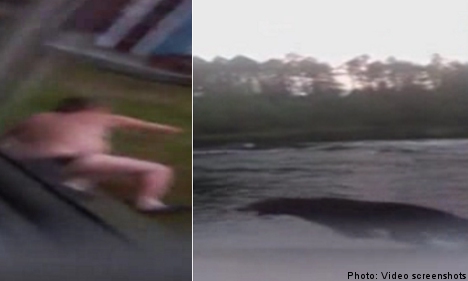 Last Sunday, Ola Åkesson left his normally tranquil summer cabin in the Ängraån nature reserve in northerneastern Sweden to take what he referred to as his “night time piss”.

Looking up as he heeded nature’s call, Åkesson saw a baby elk on the other side of the stream.

“I called to my wife to get out the iPad to film the elk, when all of a sudden she screamed that there was a bear behind me,” Åkesson told The Local.

“I turned around and there was a huge bear right beside me – maybe half a metre away, I could have reached out and touched it – but I didn’t even have time to think.”

As the bear came charging onto the scene, Åkesson fell to the ground, all the while with his wife screaming in the background while filming the commotion.

“Look out Ola – a bear is coming!” screamed Åkesson’s wife in the video, followed by stream of well-known Swedish swear words.

The bear, which Åkesson believes was hunting the little elk, then plowed onto the waterside deck in a frenzy, knocking a bird-shaped ornament into the water, before then vanishing back into the woods.

Meanwhile, a half-naked Åkesson stumbled back up to the house in his underwear.

It remains unclear whether the bear was after the elk, or a taste of Åkesson’s own Swedish meatballs, yet the Swede says he doesn’t care.

He’s just happy to be alive to tell the tale.

When asked how it felt to shoot to fame in his underwear, the 61-year-old Åkesson laughed.

“Ah, that’s no problem for me at all, I’m just glad the whole thing was caught on camera otherwise no one would believe it,” he chuckled.

As for the couple, Åkesson told The Local that life will continue as normal, adding that there weren’t even any plans to add an indoor toilet to the country house in order to ensure he and has wife avoid any future unexpected run ins with wild animals.

“This was just a one in a million chance; we doubt it will ever happen again,” he said.