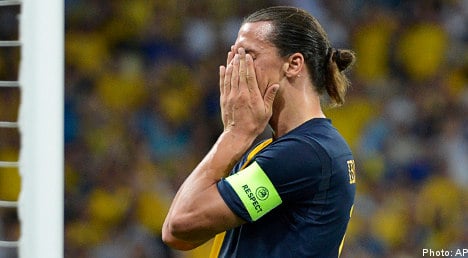 A heated altercation is said to have taken place between Sweden’s captain Ibrahimovic and his first-half strike partner Markus Rosenberg.

Rosenberg has failed to score for his national side in five years, dating back to 2007, and was only drafted into the squad as a replacement for the more fancied John Guidetti, who was deemed unfit.

“We talked about our need to play better football,” Rosenberg said after the match, according to the Aftonbladet newspaper.

“There were too many long balls and the midfield did not come to support us up front enough. It was almost two of us against five [Ukrainian defenders].”

Much criticism has come in for the Swedish team’s tactical set-up in last night’s game, with Erik Hamren’s so-called attacking philosophy that he had promised seemingly abandoned in favour of a negative, counter-attacking style.

“Zlatan would go to the ball and try to spread the play and I would get it right, but there was an ocean between the second and me and Zlatan,” a disconsolate Rosenberg added.

“There were too many long balls. It is not our way of playing football.”

The Werder Bremen striker insisted his crossed words with Ibrahimovic at the break were merely a footballing discussion, rather than a heated exchange.

“We are both from Malmö. It may look like we were arguing, but there is no problem,” he said.

Ibrahimovic went on to have words with coach Marcus Allbäck on the touchline following the final whistle, appearing increasingly animated at his frustration with his teammates.

“I spoke with all the players following the game, Zlatan was just one of them,” Allbäck insisted, according to Aftonbladet.

“I will not be telling the press what we discussed, but it’s clear that it was heated. There were situations we discussed. He asked how we experienced these different situations, it was common talk.”

Ibrahimovic was brief in his post-match comments, clearly frustrated at the lack of support he felt the rest of his team offered him. Indeed, his reaction to Johan Elmander’s miss in the final few moments of the game was a look of daggers at his teammate.

“There is nothing good about losing the first match,” Ibrahimovic said in his press conference.

“Luckily we have two matches left in which I hope we do better than today. The first half was not as we usually play. In other periods, it was much better, we created more chances. I had a good first and felt in good nick. We were 1-0 up, but two goals against us lost the game.”

Head coach Hamren had a more reflective outlook on the game at the final whistle.

“The two teams were nervous at the start. Then we started the second half

well and scored. But unfortunately they soon levelled.

“The last 20 minutes we had nothing to lose and played well,” Hamren said, according to the AFP news agency.

“I think a draw would have been a fair result as we had our chances.

scratch. You need eleven players right on their game and we only had five or

six in the first half,” said the 54-year-old – who has been in the post

“We knew the crosses would come in – and we were up against a super player in Shevchenko. Technically and tactically we didn’t cut it. We should have scored with the good chances we had at the end.”

Sweden must now take points off England in their second Group D game on Friday to salvage any hopes of progressing to the quarter-finals of the tournament.