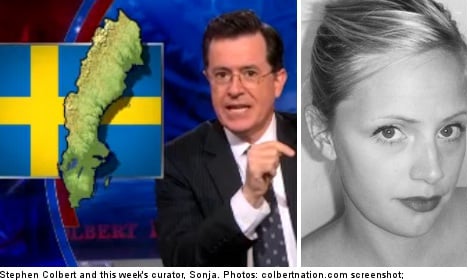 “I want control of Sweden’s Twitter account next,” said TV host Stephen Colbert on Monday after having been “enthralled” by Sweden’s Curators of Sweden campaign which puts the country’s official Twitter account in the hands of ordinary citizens.

Footage of Colbert’s plea, aired on The Colbert Report programme, has already swept across the internet.

In the three minute clip, featured below, Colbert asks fans to send emails to “Sweden’s ministry of Twitter” to pressure them into allowing him to “take the controls”.

With his 3.5 million followers, Colbert claims that “mathematically, I am 100 times more prepared for this than the entire culture of Sweden”.

However, the group behind the “Curators of Sweden” initiative, the Swedish Institute (SI), has told Colbert to be patient.

“People who are not Swedish citizens cannot take over the account, not yet anyway,” SI media relations manager Sergio Guimaraes told The Local.

“But we would never discard the possibility.”

After this week’s curator raised eyebrows worldwide with her online musings about Jews, Colbert couldn’t resist the chance to offer his own services.

“Sonja Abrahamsson brought some attention to Sweden with her charming question: What’s the fuzz with Jews?” Colbert said, then added:

“I solemnly swear that I, Stephen Colbert, know what the ‘fuzz’ is with Jews.”

The current rules on the official website stipulate that @sweden “currently only accepts applicants who are Swedish citizens, but admit that “this might change in the future”.

When asked how many emails it would take before the institute changed their rules, Guimaraes remained staunch.

“It’s not a question of pressure. We have a very long list already, the queue is huge. We’ll sit down and truly consider the goals of the account before we change anything,” he told The Local.

“This is not a project; we’ve been running it since December. It’s supposed to continue – it’s an initiative.”

When probed about the extra ten thousand followers that have joined overnight since the current @Sweden curator’s tweets have gone viral, Guimaraes beamed.

“It’s terrific that there’s been such a positive response. But we have been happy with each of the 24 curators so far, and have enjoyed the 20,000 plus tweets they’ve posted.”

“The following has been growing fast, and we’re proud to have been engaging so many people since we launched it,” he added.

“But Colbert will have to wait, for now anyway,” Guimaraes told The Local.