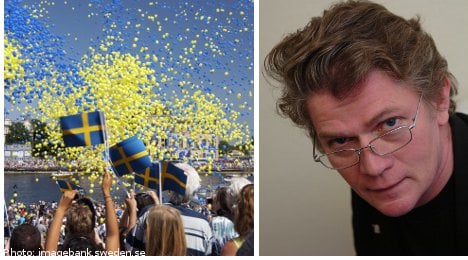 Compared to the 4th of July in the US or Norway’s May 17th, Sweden’s National Day is a bland affair.

Typically, June 6th also leaves Swedes with a choice; either one can celebrate King Gustaf Vasa’s ascension to the throne in 1523 and the commencement of Sweden as a national state. Or choose to commemorate the enactment of our current constitution in 1809.

No, we Swedes are not for carrying our national pride on our sleeves and maybe that’s also why it took until 1996 before June 6th even became a national holiday.

This in itself wasn’t even possible until a compromise had been reached with the labour market, thus creating a new bank holiday by abolishing another; the second day of Pentecost, a holiday no one really remembered why we had in the first place.

Thus the process in how we created our newest national holiday symbolised how we like to be perceived; a nation bent on consensus, making steady progress by compromise and discussion.

As a bonus, we can now also do a bit of flag waving on the side, as long it is not too ostentatious.

After all, we are a people that use the blue and yellow sparingly. Either aft on our boat, or on a pole outside the summer cottage, especially if the property in question is red with white borders.

So if you wonder if you missed the party this June 6th, don’t worry, it didn’t even really get started.

One has to use other means to get Swedes to show some national pride, and I don’t necessarily mean the on-going European football championship.

Apart from the sports sections in the dailies, most Swedes are looking forward to watching a few good games with Sweden playing, but anything beyond that would be a bonus and deep down we all know it.

On the whole, Swedes are very good at criticizing their country in a way that you’d never hear an American or Frenchman do.

Even the term ”un-Swedish” is not perceived as a pejorative, but rather as a compliment in the sense that someone could be described as ”wonderfully un-Swedish”, for being a spontaneous and open-minded person.

But there are limits. The last few years have seen a couple of rather serious flaws in the judiciary system in this country.

A self-confessed convicted mass murderer might be described as simply a psychotic addict desperate for drugs. The police seem to only perform worse with every million society is throwing at them.

The curious system of politically appointed lay-judges in Swedish courts has been questioned. The debate has been fierce and many have demanded change.

I’ll not speculate in the question of whether Assange is innocent or guilty. But one can note that his fierce attacks upon our Swedish judiciary system and rather pointed comments upon perceived hidden mechanisms behind the demands for his extradition have had at least one interesting effect.

The whole of the Swedish media world has dismissed Assange’s allegations as juvenile.

Suddenly, to the Swedish press, our legal system is nothing but a shining, near perfect international example of the rule of law, habeas corpus and of magnificently independent courts and judges.

Gone is the petty bickering about those above-mentioned minor flaws, they are perceived as far too exaggerated by ignorant foreign correspondents.

Thus the order is restored. After all, only we Swedes are competent to criticise the best country in the world.

And that has nothing at all to do with nationalism. Right?