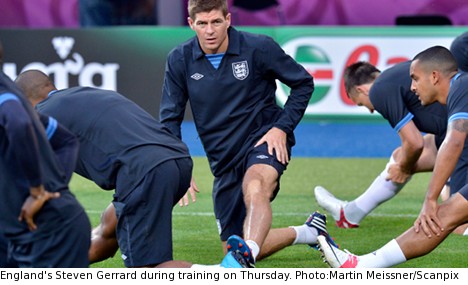 After a nightmare loss to Ukraine to kick-off their Euro 2012 tournament hopes, Sweden must dust themselves down to face England on Friday night in Kiev.

A resolute display in Donetsk earned them a 1-1 draw against France, now England will be looking to build on the disciplined and tactically aware foundations set out for them by new head coach Roy Hodgson.

Sweden will have to look to capitalize, however, on England’s current lack of firepower up front, with striker Wayne Rooney remaining suspended for this second group match.

Despite a 1-0 defeat against England at Wembley in November, Erik Hamrén’s men will go in to this crucial match with history on their side, having never lost to the 1966 World Cup winners in any competitive major tournament.

Regular opponents in summer tournaments during recent years, the sides drew 2-2 back in the group stages of the 2006 World Cup in Germany, and 1-1 four years earlier in Japan and South Korea.

Sweden will think back with fond memories at their 2-1 home win over England at Euro ’92, and will be looking to emulate such surprise success this time around.

“We are in a position where we can’t lose any more games and hopefully we can win both,” Sweden defender Jonas Olsson told AFP ahead of Friday’s match.

“We will focus on Friday first, try to get a good result there. It will be nicer to win both games and not be depending on other results.”

Today England are a side in transition, and with relatively low expectations for the tournament. New manager Roy Hodgson may feel he holds the key to unlocking Sweden’s strategy, however, what with his vast experience of management in Scandinavia.

With the tasks he has undertaken for clubs across much of Europe, Hodgson may be quietly confident that he can be the man to finally end England’s tag as perennial tournament mis-firers in Poland and Ukraine. His tactical stance thus far has been to make the Three Lions disciplined and hard to break down.

“The Swedes are difficult and I don’t think we’ve beaten them for a long time in a competitive game. We will respect them but, with all respect, it’s a game we should win,” was the bullish assessment of England captain Steven Gerrard.

Zlatan Ibrahimovic will certainly be in for a tricky night under the watchful eye of England’s back line. The Swedish captain outlined his determination to silence his many critics in the English media in his recent autobiography.

Friday night might well be his last chance to do so.

And after having to put up with the majestic runs of Andriy Shevchenko against Ukraine earlier this week, facing either Danny Welbeck or Andy Carroll will be a more welcoming prospect for Sweden’s defenders, who will nevertheless need to rectify their sloppy marking in Kiev.

They will also need to be more than wary of the threat posed by the quality of Ashley Young, Steven Gerrard and England’s joker in the pack, young winger Alex Oxlaide-Chamberlaine.

With such Premier League stars being familiar to Swedish fans and players alike, this is perhaps the fixture the country will be looking forward to with the most anticipation.

After Monday’s defensive mishaps, Hamrén is expected to move Adreas Granqvist to right-back, and bring in West Brom defender Jonas Olsson into central defence – a player who has faced several of the England stars in his time in the Premier League.

A win against this more coveted opposition would be the springboard back into group qualification contention that Sweden expect, but they will certainly have to improve on Monday’s lackluster display.