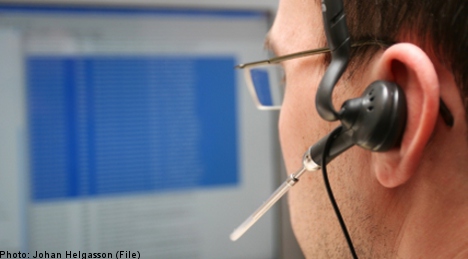 The findings are based on data gathered by researcher Martin Svensson who has spent the last six years interviewing emergency operators at SOS Alarm and listening to calls made by people in need of emergency assistance.

One of the conclusions Svensson drew from the data he collected is that it’s not only what you say when you place a call to Sweden’s 112 emergency number that matters.

Also important is how your voice sounds to emergency operators on the other end of the line.

If the call is placed by a patient whose voice sounds panicked, that person is more likely to be deemed in need of emergency assistance compared to someone who calls with an angry voice because anyone who has the capacity to scream can at least be seen as being able to breath well.

“There is a clear connection between the expression in people’s voices and the help they receive, but one should see that as only part of the decision that’s made. The voice isn’t the decisive factor and that’s important to point out,” Svensson told the TT news agency.

Svensson’s findings are included a doctoral dissertation entitled “Routes, Routines and Emotions in Decision Making of Emergency Call Takers” which he defended last week at the Blekinge Institute of Technology.

“One could say that what I’ve found highlights to complexity involved when a decision is made in an emergency call,” he said.

The task of emergency operators is complicated by the fact that they can’t see the people who are calling, leaving operators only able to consider what callers say and how they sound.

“Language is of course a critical link. A person needs to be able to express why he or she needs help,” said Svensson.

A spokesperson from SOS Alarm told TT that the emergency operator service is very interested in Svensson’s findings.

“We’re going to analyze the results more closely and in all likelihood use it to help us to make even better and safer assessments, said SOS Alarm’s Anders Klarström.

“There isn’t a lot of research into emergency calls, and against that background this is incredibly valuable for us.”