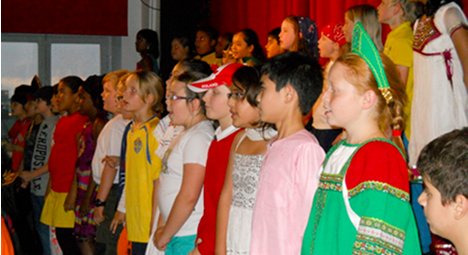 “If adults could treat each other as the students do, we would have no more wars,” says Rune Svaninger, Director of Stockholm International School.

As I arrived at the attractive school building in central Stockholm, the children were just coming in from their morning break. Laughing and playing as they ran up the stairs, kids of every ethnicity were milling about on their way back to their classrooms.

Stockholm International School educates 550 students from over 50 different countries. From the United States to Uzbekistan, from Sweden to Singapore.

“We usually say that this is like a miniature United Nations,” says Rune Svaninger, now in his third year as the school’s Director.

He describes one of the school’s most cherished traditions. Every year on October 24, Stockholm International School celebrates UN Day (see video below). All the students, some in national costume, line up by nationality, and waving their respective flags set off on a colourful parade around the park just across the street.

Stockholm International School receives children between the ages of three and 19. From its humble beginnings as a small kindergarten class, over half a century ago, to today’s internationally accredited school.

This term sees the school celebrating its 60th anniversary, making it the oldest International school in Scandinavia.

The school, a non-profit foundation, is an authorised member of the most popular international programmes, from the lower grades’ International Primary Curriculum (IPC) to the International Baccalaureate (IB) Middle Years Programme, all the way through the challenging IB Diploma Programme for high school students.

Becoming a member school of these programmes is tough to say the least, as the rigorous authorisation process demands its fair share of both work and resources. The reward is an unbeatable seal of quality.

“We send all our teachers on workshops at least every third year,” explains Svaninger.

Following these programmes also means that Stockholm International School can offer students a high level of consistency in their learning.

“Students can finish here on a Friday, and start in New Delhi, Cape Town, Seattle or Buenos Aires on the Monday, in the same programme,” explains Rune Svaninger.

He emphasizes that Stockholm International School is unique among Stockholm schools, as the only truly international school. Although there are some other schools that offer tuition in English, these either follow the Swedish curriculum or do not cater for students for the whole of their school careers.

“I think one of our biggest strengths is that we just follow the international programmes. We have nothing to do with the Swedish curriculum.”

Although Stockholm International School’s student numbers are at an all-time high, with just 550 students the school continues to be fairly small.

“Students can’t hide, and students can’t not be seen. They get the attention they need,” explains the Secondary School Principal Kevin Munro. He believes a better learning environment is created through the small school size and, not least, the uniquely small class sizes.

At Stockholm International School, classes are never larger than 20 pupils, and often much smaller. This allows the qualified and international teaching staff to give their students that extra bit of attention that makes all the difference.

Going the extra mile can be done in any number of ways. At Stockholm International School, it means students are taken on school trips to discover and learn more about Sweden, from grade six and up. It also means offering students after-school activities that range from orchestra to swimming practice with English instruction, and having one of Stockholm’s best learning support departments, with particular emphasis placed on teaching English as an additional language.

The majority of Stockholm International School’s students come from diplomatic families, or have parents that have taken jobs in the Stockholm offices of major corporations. With such highly mobile students, often recently arrived in the country, much of the school’s work goes beyond the academic, and looks to make sure entire families feel integrated in the community as quickly as possible.

“The staff at school work with students both academically and socially. Transitioning to a new school in a new country comes with some difficulties. We know about these issues and work together with parents to help students settle in” says Kevin Munro.

He believes that the uniquely global environment offered by Stockholm International School is an asset for both children’s learning experience and for understanding different cultures.

“It definitely adds a wider perspective for kids to draw experiences from. I think it does give them a richness of understanding, not only of themselves and their culture, but of other cultures.”