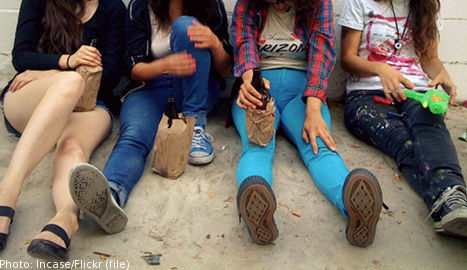 The study first examined the alcohol consumption habits of 14- to 17-year-olds, before catching up with the subjects again when they were in the late twenties.

It found that 27-year-olds who drank too much often had consumed very little or no alcohol when they were teenagers, the Dagens Nyheter (DN) newspaper reports.

“More than every other young adult who had risky drinking behaviour in our study didn’t drink at all as a teenager,” Stockholm University sociologist and study co-author Thor Norström told the newspaper.

“That’s surprising because previous research gave the impression that those who drink a lot in their teen years are the ones who have alcohol problems later in life.”

The study, co-authored with Hilde Pape from the Norwegian Institute for Alcohol and Drug Research and published in the Journal of Studies on Alcohol and Drugs, looked at the drinking habits of teenagers in Norway.

The 1,800 subjects included in the study were first interviewed about how often they got drunk when they were teenagers in the 1990s.

The researchers caught up with the study subjects in 2005, when they were between 27- and 30-years-old, and once again asked them about their drinking habits.

The follow-up interviews also revealed that two of three of the subjects who got drunk once a week as teenagers consumed only a modest amount of alcohol as adults.

According to Norström, the study shows that campaigns to discourage teenage drinking have little effect in the long run, as those who would appear to heed the warnings as teenagers nevertheless end up having alcohol problems later in life.