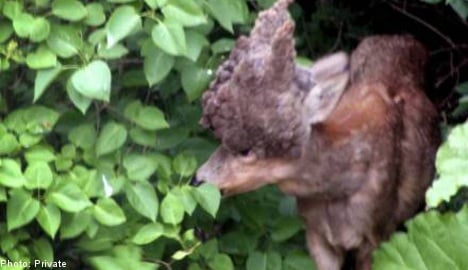 “He was looking straight at me and I just thought ‘damn, he looks strange’,” Enbågen told The Local.

The deer, which turned out to be suffering from a condition called gnarly cactus, or cactus buck, was startled at Enbågen’s arrival and jumped over the rhododendron shrubbery and disappeared.

“But when I was having breakfast he returned, so I took some pictures and filmed him through the window,” Enbågen said.

The film clip, featured below, clearly shows the deer with its bizarre head gear moving around the garden.

Gnarly cactus is a condition which causes the animal’s antlers to continue growing until they cover its eyes. Normally, a hormonal impulse stirs the bucks to rub the velvet off its antlers every year, and eventually shed them.

When a hormonal imbalance disturbs the shedding of the animal’s antlers, each growing cycle produces more velvet and antler material on top of the previous year’s until they eventually grow over the deer’s eyes, resembling a cactus.

An animal with this condition will have very small or completely undescended testicles.

“It didn’t have horns as such, more like a big lump or a hat on top of its head. It looked gnarly,” said Enbågen.

Animals with this condition are not expected to live for a long time. Once the antlers grow over his eyes, the animal will be unable to fend for itself.

However, Leif Lithander of the Swedish Museum of Natural History (Naturhistoriska Riksmuseet), is sceptical against shooting an animal solely due to this condition.

“But he should be kept under observation and if the horn grows over his eyes he should be culled,” he told local paper Göteborgs-posten.

Enbågen has had plenty of deer visit his garden before, but never any animal that looked like this one.

“It stayed around for a while, knocking over some water cans and grazing in the garden. It’s probably lurking around in the neighbourhood still,” Enbågen told The Local.