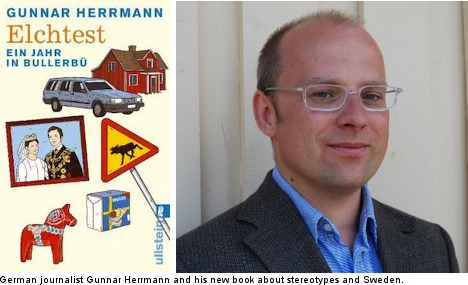 Herrmann, 37, works as a foreign correspondent for the Süddeutsche Zeitung. In addition to spending his days scouring for Swedish stories of interest to readers in Germany, he has also written two books detailing his impressions of Sweden and the Swedes.

As the son of a Swede who grew up in Germany, Hermann has a closer relationship with Sweden than the average German.

His latest book, “Alter Schwede! Zwei Hochzeiten und ein Elchgeweih” (‘Goodness Swede! Two weddings and an elk antler’), was published in January and uses his own personal reflections as the basis for a humorous exploration of Germans’ often-idealized view of Sweden.

The Local: You’ve lived in Sweden for six years now. What were the stereotypes you had in mind before moving to Stockholm?

Gunnar Herrmann: Since I have relatives here and spent a year studying in Lund, I knew the country pretty well. So I didn’t have a picture of [children’s author Astrid Lindgren’s] Bullerby in my head, that’s for sure.

Knowing Ikea, you associate Sweden with simplicity and practicality. And then you come here and realize that it may be something more complicated than putting together a Billy bookshelf.

TL: And now, what do you value most in Sweden?

GH: The wonderful nature, of course. And Sweden is a safe country. And because I have two small children, I definitely value the child friendliness and child care.

In most coffee shops, there are baby changing areas. The kindergartens are fantastic. In Bavaria, where I come from, that’s not always the case.

TL: In your new book, you alternate writing chapters with your wife. Do men and women see Sweden with different eyes?

GH: I think there is no general difference in the way men and women look upon Sweden. Although my wife works, she is the one who takes care of our children the most. So we get to know different sectors of society.

My view of Swedish society is through my work, especially the official parliamentary parts of Sweden and the government ministries.

My wife however, goes to the parent evenings in school or organizes children’s birthdays with the other parents. She may even get to know Sweden in a more intimate way.

TL: What gets on your nerves about Sweden?

GH: Sometimes the food. I find it somewhat monotonous. And Sweden is sometimes very bureaucratic. It’s all very well organized and everything follows clear rules.

Therefore, it is often very inflexible and exceptions are rare. That’s something I could go crazy about sometimes.

TL: Speaking of crazy: Valborg and Midsummer are two rather mad Swedish festivities. Do you celebrate these parties too?

GH: Definitely, together with my relatives. But just as we celebrate the Swedish traditions, we also celebrate Germany’s traditions too. Many events can be transferred easily, because the cultures are so compatible. There are Midsummer celebrations in Bavaria, too – they look just different.

TL: Is participating in these festivities the best way to integrate into Sweden?

GH: I think Swedes have a small circle of acquaintances, but very close friends. Getting into a clique can be tough sometimes.

But at parties or in clubs, Swedes always like you to join in. You just have to be open and engaging.

TL: You have now written two very humorous books about your time in Sweden. Do you think it’s easy to write about Sweden in such a manner?

GH: Yes, because Sweden is very well known in Germany for being like this. Many Germans have a connection with Sweden, either by Pippi Longstocking, Ikea or just through their holidays.

And then there are certain images or stereotypes they have, coming from movies, books, or vacations. But they are not all true. And if you play around with these stereotypes, a certain humour often follows.