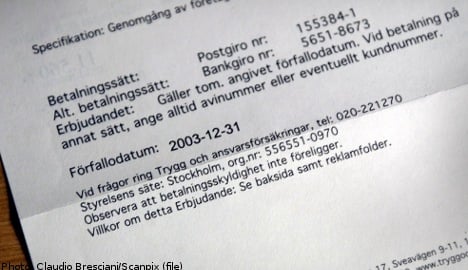 “The real problem is that there is no experience among local police stations across the country to investigate this properly. There is no organized or functioning cooperation between different agencies, which is remarkable,” said public prosecutor Tord Josefsson to news agency TT.

Josefsson has recently appealed a billing fraud verdict in Helsingborg, in southern Sweden, and is set to discuss these issues with minister for justice, Beatrice Ask, on Wednesday. According to Josefsson, harsher legislation is not the answer to the increasing problem.

He told TT that longer sentences are not the answer, as the maximum penalty for economic crime is five to six years but that it is unusual for courts to give out sentences this long.

“That courts sentence fraudsters to this long sentences is very uncommon. It really only occurs when the activity is seen as particularly menacing to society,” Josefsson told TT.

Ask, however, told TT that the police and courts need to look closer at this kind of crime.

”It is developing at an alarming pace and is becoming a huge problem. Fake bills have become a major source of income for organized crime,” Ask said.

Although the rules need to differ between individuals and small businesses, it is vital that there are clear guidelines in both cases, according to Ask.

”It’s not all about giving out harsher sentences but also to see on a larger scale what problems there are. Maybe one also needs to question whether the current legislation is adequate,” Ask told TT.