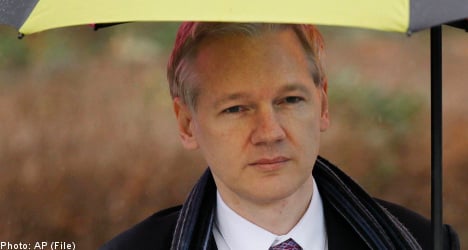 The former computer hacker told Australia’s ABC radio of his fears that he would end up in the hands of the United States, which he says want to try him for divulging American secrets.

But he conceded there was as yet no current US indictment against him.

“Of course not, at the moment the matter is before the grand jury,” he told ABC. “Until it comes out of the grand jury there will not be such evidence afforded.”

Assange sought asylum on Tuesday in a dramatic bid to avoid extradition to Sweden over allegations of rape and sexual assault.

He made the bid, he said, because he was not prepared to go to Sweden under the terms in which he believed he would be held there.

“The Swedes announced publicly that they would detain me in prison, without charge, while they continued their so-called investigation,” he said.

WikiLeaks enraged Washington by releasing a flood of classified US information about the wars in Iraq and Afghanistan, as well as more than 250,000 classified US diplomatic cables that embarrassed a slew of governments.

Assange said he chose the Ecuadorian embassy ahead of his home country’s because he felt Canberra had done nothing to protect him, a charge the government has denied.

“There are serious issues here, and they are being hidden by the slimy rhetoric coming out of the US ambassador to Australia, via (Australian Prime Minister Julia) Gillard… and that needs to stop,” said Assange.

Assange will remain inside the embassy while Ecuador considers his request, a process that could take “hours or days”, a spokesperson for the whistleblower website said Thursday.

Earlier, Ecuador’s president Rafael Correa said his government would take its time in deciding whether to grant asylum to the Australian anti-secrecy campaigner.

British police said on Wednesday that because he was no longer staying at his designated bail address, Assange had breached his bail conditions and was now subject to arrest if he left the embassy.

Britain’s Foreign Office said however that because Assange was still on diplomatic territory he was “beyond the reach of the police”.

Three policeman stood guard Thursday outside Ecuador’s embassy, a flat in a mansion block in the upscale Knightsbridge area of central London.

Correa, who was interviewed by Assange for his television show, which airs on Moscow-backed broadcaster Russia Today, indicated that the decision-making process could take some time.

“He (Assange) presented his reasons. We are going to verify them… We will take the time necessary,” Correa told AFP, adding that it would be done “with absolute seriousness and absolute responsibility.”

The leftist leader, who has often been at odds with Washington, said his government was studying Assange’s claim that he could be extradited from Sweden to the United States on political grounds and possibly sentenced to death.

“Ecuador is a country which defends the right to life. We have to see whether there is a threat to Julian Assange’s life,” Correa said, speaking on the sidelines of the Rio+20 summit on sustainable development Wednesday.

Britain’s Supreme Court last week threw out Assange’s application to reopen his appeal against extradition to Sweden after a marathon legal battle.

He has until June 28th to lodge an appeal at the European Court of Human Rights in Strasbourg, after which the extradition process can begin.

The asylum bid is the most dramatic twist yet in a case dating back to December 2010, when Assange was first detained in London on a European arrest warrant.

Anna Alban, the Ecuadorian ambassador, said in a statement Wednesday that she had held “cordial and constructive” talks about the asylum request with Britain’s Foreign Office.