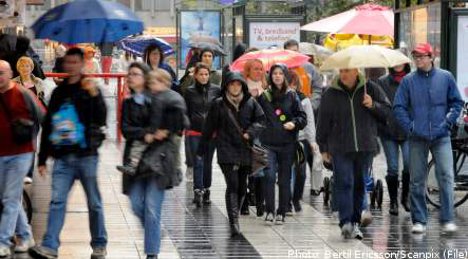 Meteorological institute SMHI has issued a class 1 weather warning (on an ascending scale of 3) for much of northern Götaland, Öland, Gotland, as well as eastern Svealand.

The heavy rainfall is expected to begin during Sunday evening and continue overnight into Monday.

“There could be about 35-45 millimetres of rain falling during the course of Monday,” said Lisa Frost, a meteorologist at SMHI.

The province of Skåne received a taste of what is to come during Sunday morning as rains pushed in from the North Sea and lashed southern Sweden.

The rainfalls are expected to increase in intensity as the low pressure front sweeps north across Sweden during the course of the day.

The weather in northern areas of the country will be less dramatic, according to an SMHI statement, but the risk of showers remained.

Heavy rains and bouts of thunder are expected to remain in parts of Götaland through Wednesday with conditions stabilizing somewhat on Thursday.

Warmer weather is forecast in time for next weekend when many Swedes can be expected to begin their traditional July summer holidays.