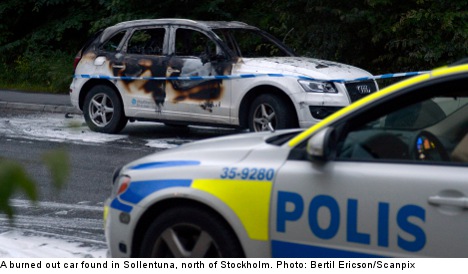 Police were first alerted at 8.20pm about a car in flames at the Kymlinge link connecting the E18 and E4 motorways in Kista north of Stockholm.

Two people wearing masks were seen leaving the scene on a motorcycle or scooter. In addition, a number of caltrops – metal ‘crows’ feet’ designed to puncture car tyres – had been strewn out across the roadway in the vicinity of the burning car, disabling a number of passing vehicles.

Then, at 8.26pm, a report came of another burning car on the E4 motorway near the Järva interchange just north of Stockholm and about five kilometres from the first fire.

Witnesses reported seeing people fleeing the scene in another car shortly after the fire started. Caltrops were also left on the roadway, leaving a number passing cars with flat tyres.

“I thought, what an idiot, then someone jumped out and threw a bucket with something that looked like caltrops on the road,” one witness whose car suffered a flat tyre told Aftonbladet.

Finally, at 8.28pm, police were alerted to a third car fire near the Helenelund train station in Sollentuna, about eight kilometres north of the second fire.

However, at the third fire there were no reports of people leaving the scene and no caltrops were used.

As of late Monday night, police were still working out whether there was a connection between the three mysterious car fires, or if they may have been related to another crime.

“And we’ve really put a lot of energy into checking out every possible target in the area. No major crimes have occurred during the evening,” police spokesperson Ulf Lindgren told the TT news agency.

One theory is that the fires may have been related to a sort of “practice run” to see how police reacted ahead of some future planned crime.

“It’s hard to say. That’s pure speculation. It could be something like that or that they had planned to do something else, but broke off mid-operation for some reason,” said Lindgren.