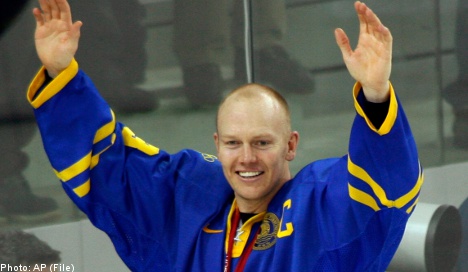 Sundin was the first European-born player to be taken first overall in the NHL Draft, the Quebec Nordiques doing so in 1989. ¨¨

He spent 13 seasons with the Toronto Maple Leafs, setting club career records with 420 goals and 567 assists. He helped Sweden capture Olympic gold in 2006 at Turin.

He retired in 2009 and Tuesday’s vote was the first time Sundin’s name had appeared on the ballot for entry into the Hall of Fame.

“Three years have passed since I retired and it makes me realize how privileged I was to play my entire career in Canada, where hockey really matters,” Sundin said.

“Having my hobby and love for a sport become my livelihood really allowed me to live out my dream.”

Sundin now joins countryman Börje Salming as the second Swede to be voted into the Hockey Hall of Fame.

Salming, who was elected to the Hall in 1996, played 16 seasons with the Toronto Maple Leafs, before finishing his NHL career with the Detroit Red Wings.

In addition to Sundin, Russian star Pavel Bure, as well as Canadians Joe Sakic and Adam Oates were elected to the Hockey Hall of Fame.

The four former National Hockey League legends will be inducted into the sporting shrine on November 12 in a ceremony at the Hall of Fame in Toronto.

Bure joined the Vancouver Canucks in 1991 and won NHL Rookie of the Year honors. The six-time NHL All-Star won the league scoring title in 2000 and 2001 while with Florida and finished his career with the New York Rangers in 2003.

“It’s a tremendous honour to be selected,” Bure said. “Growing up I never even thought I would be able to play in the NHL, much less make it into the Hockey Hall of Fame.”

Sakic spent his entire 20-year career with the same club after being taken 15th in the 1987 NHL Draft by the Quebec Nordiques and moving with them to Denver when the franchise became the Colorado Avalanche.

His 17-year stint as Colorado’s captain was the second-longest such run in NHL history. He helped the Avalanche claim Stanley Cup titles in 1996 and 2001 and he also played for Canada three times at the Olympics, being named Most Valuable Player of the 2002 Canadian Olympic gold medal squad.

“As a kid I always dreamed about making the NHL, but never really thought at all about the Hockey Hall of Fame,” Sakic said. “I was fortunate to play 20 seasons, which gave me the opportunity to build on my list of accomplishments.”

Oates signed with Detroit in 1985 and played 19 NHL seasons with seven clubs, finishing sixth on the all-time NHL assists list with 1,063 before retiring in 2004.