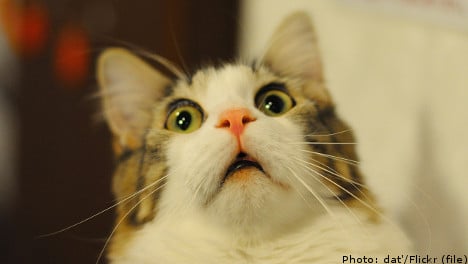 The cat in the picture is not the cat featured in the article.

In March 2010 the cat owner found that her beloved 3–year-old pet cat couldn’t pee in the litter box, but screamed every time it needed to do its business, according to local paper Skånskan.

After taking her feline friend to see the local vet, the owner was told that her companion was suffering from urinary stones, a not uncommon affliction among the feline species.

But, instead of just removing the stones, the vet in Skurup also amputated the cat’s penis and then sent the animal back home to its owner, reports the paper.

According to the owner, the animal was in bad shape following the operation, refusing to eat or drink and suffering from incontinence.

After trying to get in touch with the clinic during the weekend, the surgeon called back on Monday and advised the owner to bring her pet back in.

The vet then decided to operate again and after inspecting the cat’s affliction told the owner that it didn’t look good.

The vet then gave the owner a choice: either the cat could be fitted with a catheter to allow it to urinate or it could be put down.

To spare the cat further suffering because she didn’t receive a full explanation that the catheter would be a temporary measure, the owner decided to have the cat put down.

Following the incident, the vet has been cautioned by Sweden’s veterinary medical responsibility board (Ansvarsnämnden för djurens hälso- och sjukvård), which questioned the need to amputate the cat’s penis in treating the urinary stones.

The board also took issue with the decision to send the animal home so soon.

After receiving the agency’s warning, the vet has promised to change procedurea at the clinic.

“We will follow the agency’s advice and change our procedures so that animals that have undergone surgery can stay two or three days after an operation,” the vet told Skånskan.

The vet, however, is adamant that the complications stemming from the cat’s cut off penis never would have occurred had the owner not removed the post-surgical cone placed on the cat to prevent it from licking its wounds, which in turn caused an infection.

Regarding the owner’s choice of having the cat put down due to a misunderstanding about how long the animal would have to be catheterized, the vet told the paper that it was neither his nor the owner’s fault.

“It is possible that I didn’t say that the catheter would only need to be used during the healing process. But it is logical that a catheter isn’t something a cat would have for the rest of its life,” he told the paper.