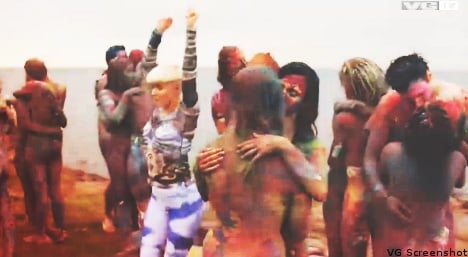 Shot at last year’s Hove Festival in Norway, the video is the work of director Luke Gilford, who took time out from documenting the star’s stage show to film fans who had answered the rallying cry to “get naked for Robyn”.

“The natural landscape at Hove seemed an ideal place to do something so surreal,” Gilford told newspaper VG.

“I also thought it would be interesting for such a popular artist to have an emotional experience with her fans,” he added.

Clad only in splashes of body paint, the willing extras filed into the forest to shake their stuff to the Avicii remix of the single Hang With Me.

Gilford had earlier pitched the idea to Robyn’s management, but it wasn’t until the day before the singer was due to arrive in Norway that he finally heard back from her.

Flyers were quickly distributed around the festival area calling for volunteers over the age of 18 to bring along their partners and shed their clothes.

Now, a year on, the video has finally received Robyn’s seal of approval.

“Robyn wasn’t satisfied with the first edit, so Luke sent over a new final version to Robyn a couple of weeks ago,” festival spokesman Gaute Drevdal revealed.

“The new version is quite different and this is the video Robyn has approved,” he told VG.