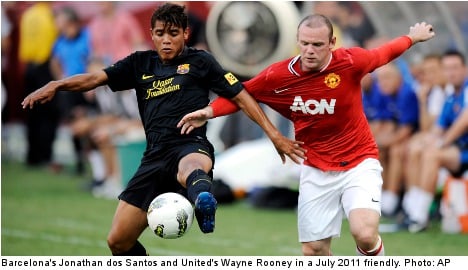 United, beaten 3-1 by Barca in the 2011 Champions League final, will face the Catalans as part of a busy pre-season schedule which includes matches in Norway, South Africa and China.

“Manchester United against Barcelona is one of the top fixtures in world football and we are delighted to work with GotEvent to bring this match to the beautiful city of Gothenburg,” said United chief executive David Gill.

“We have a large following throughout Scandinavia and it’s great that this match will form part of our preparations for the new season,” he added.

The match will be played at the Ullevi stadium, and marks the first time the Manchester side have played in Gothenburg since 1994 – and will be their second time in the west Sweden city under Sir Alex Ferguson’s time as manager.

The official Barcelona website points out that the friendly will be a replay of the Champions League finals between Manchester United and Barcelona in 2009 and 2011, and no doubt aim for similar results.

“The finals in Rome and London bring back good memories for Barcelonistas seeing that these were the venues that saw Barca claim the third and fourth Champions League titles in the history of the Club,” the team wrote wrote.

Tickets will be released via Ticnet on Tuesday, July 3rd at 9am.