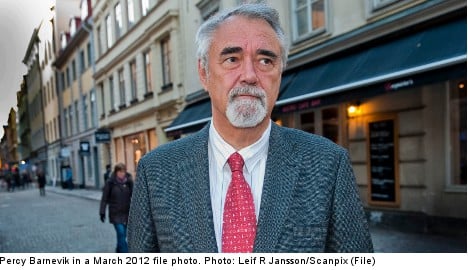 Barnevik, 71, was subsequently released on bail and called the accusations “baseless”.

“They come from a woman who is stalking me,” Barnevik told the Expressen newspaper at the time.

“She’s a crazy woman, but nothing to be concerned about.”

On October 3rd, police in London confirmed for the TT news agency that the investigation into the allegations had been dropped.

“Interviews have been completed and the police will not go forward with the case,” police in London wrote in an email.

The Swedish businessman, who hails from Simrishamn in southern Sweden and has made his home in London for several years, was placed under in June arrest following a previously scheduled meeting at a London police station in order to learn more about the accusations against him.

Police in London confirmed that the 71-year-old Swedish citizen had been arrested based on “sexual allegations” stemming from an incident that allegedly took place in April this year.

“These are allegations, plural, about sex crimes. It can include a number of different sex offences, but doesn’t include rape,” a Scotland Yard spokesperson explained to the Aftonbladet newspaper at the time of Barnevik’s arrest.

Police are refusing to release many details about the accusations against Barnevik, who was head of Swedish industrial firm Asea in the early 1980s before continuing as head of ABB until 1996 after the Swedish firm merged Swiss Brown, Boveri & Cie in 1988.

Barnevik was also a member of the board of directors for US automaker General Motors and Anglo-Swedish pharmaceuticals giant Astra Zeneca, and chaired the board of the Wallenberg family holding company Investor from 1997 to 2002.

Officials with the Metropolitan Police emphasized that “only allegations” were filed against Barnevik, who was immediately released on bail.

Throughout the entire ordeal, the Swedish businessman maintained that the sex crime claims were a fabrication.

“They are simply fake. If you are a public figure, these sorts of things can happen. It happens all the time,” he told Expressen.

“It’s part of a campaign by a person who is out to get me. As a public figure, you have to deal with people who want money and influence.”