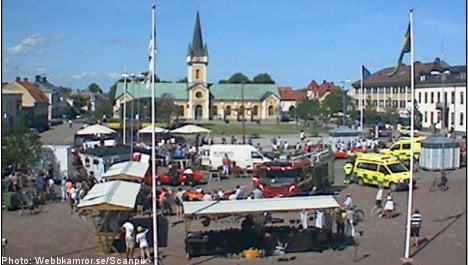 The emergency services were called at 2.47pm on Saturday afternoon and five ambulances were immediately dispatched to the scene.

Chaotic scenes greeted the arrival of the emergency services with local restaurant owner Kenneth Sunesson able to describe the commotion.

“I stood in the kitchen when I heard something that sounded like a real ‘burnout’. I went out to see what happened and there was a sports car that had driven into a vegetable stall, which in turn had fallen down onto a ice cream kiosk,” he said.

The car in question is described as “Italian” and was one of several in the vicinity of the square who were revving their engines in chorus.

“It seems as if the driver was parking and that the accelerator was pushed accidentally. When I came out I saw two injured, one on the bonnet and one under the ice cream kiosk.”

The Italian sports cars were part of a larger car meet hosted by the Swedish De Tomaso car club and there were a large number of people on the square to view the vehicles.

The driver in question was reported to have been left shocked by the events. He is reported to be a member of the car club.

“We were showcasing our cars to the public,” said Lasse Uhr, club member and organizer of the meet.

“I have no idea how it happened. I have not had time to talk to the driver, we are all shocked,” he added.

The police were in attendance on Saturday afternoon and the car club was awaiting further instructions as to what to do with the remaining vehicles.

The car involved in the crash had by 5pm been removed for inspection to ascertain the cause of the accident.