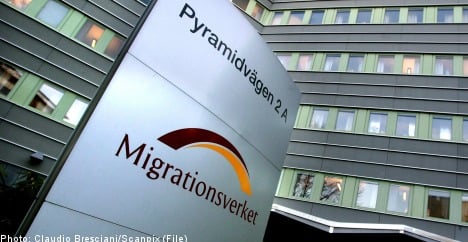 So far this year, 16,335 asylum seekers have come to Sweden, up from the 12,595 people who applied for asylum during the first six months of 2011, according to new figures from the Swedish Migration Board (Migrationsverket).

In addition, 1,467 of the asylum seekers who have come to Sweden so far in 2012 are unaccompanied minors, an increase of 52 percent from the same period last year.

A majority of the children come from Afghanistan and Somalia, according to the Migration Board.

The second highest number of asylum seekers, 2,012, came from Afghanistan, an increase of 32 percent compared to the same period last year.

The Migration Board also reported a drop in the number of people seeking residence in Sweden based on family ties.

Excluding seasonal berry pickers, the number of labour migrants from outside the EU/EES-area fell slightly with 6,215 people being granted work permits so far in 2012, compared to 6,734 in the first half of 2011.

Computer specialists are the the largest category of non-EU labour migrants, with 1,733 being granted temporary work permits in Sweden during the first six months of the year, an increase of 40 percent from last year.

The number of engineers and other technical specialists granted work permits has also increased, with most coming from India, China, and Pakistan.

Meanwhile, the trend of fewer labour migrants working in the restaurant and service branch continued.

However, the number of berry pickers offered work permits in Sweden has increased dramatically, jumping from 494 during the first half of 2011 to 5,240 for the first six months of 2012.

According to the Migration Board, the rise can be explained to some extent by the fact that many applications were filed after July 1st last year.

Nevertheless, the number of berry pickers is expected to be substantially higher this year compared to 2011.