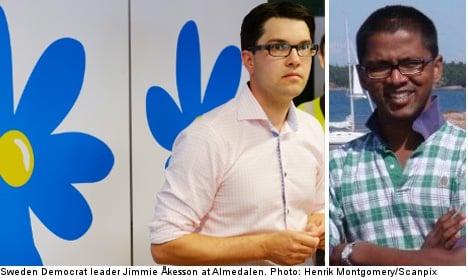 The Sweden Democrats were given the first day at Almedalen and hoped to use the occasion to go on the political offensive.

Jimmy Åkesson, their slick, young and charismatic leader, wants to the party to be seen as more than a one-issue (immigration) party in hopes of appealing to more voters.

He has identified a gap among socially conservative voters, and wants the Sweden Democrats to fill it, he told reporters ahead of his keynote address on Sunday night.

Stifled by the sweltering heat of a cramped hotel conference room, Åkesson quipped to journalists “we don’t want to be in here as much as you don’t”.

The Sweden Democrat leader then spoke about the need to reform Sweden’s criminal justice system, proclaiming having a “criminal history should lead to a conviction” before waxing poetic about the success of trials against mafia families in New York during the 1970s.

He explained that such a phenomenon is “alien to the Swedish justice system” but insisted that we live in a “new reality” that required tough measures.

The entire atmosphere at the briefing was in many ways surreal because it felt so normal.

Here was Åkesson, the leader of what was once a party relegated the fringes of the Swedish political establishment, speaking much like the leader of any other run-of-the-mill political party in Sweden, with a normal party leader that suggested a series of plausible reforms.

The theme of his speech later in the evening echoed a theme touted in the education policy of former US president George W. Bush that “no one should be left behind”.

Suddenly, Åkesson was sounding very much like a middle of the road conservative. The question hanging in the air was: have the Sweden Democrats really changed?

The answer came soon enough, however, when party secretary Björn Söder displayed the kind of behaviour journalists are more accustomed to from Sweden Democrats as he bashed journalists in the room for the way his party is portrayed in the press.

According to Söder everything is the media’s fault.

And when journalist Björn Häger, who has written a book about the Sweden Democrats arguing they should be treated as a normal political party, suggested to Söder that the party deal with sympathizers who say outrageously racist things online and send death threats to journalists, Jimmie Åkesson’s right-hand man shot back with a heated reply, protesting that people must be able to express their opinions.

In the next line, Söder argued in favour of internet regulation to address abusive language. But at the same time, the party could not be responsible for anything.

The inconsistent diatribe blossomed into a full-scale rant, and the only people clapping in the audience were a bunch of Sweden Democrat supporters huddled on the side of the room.

One left the briefing feeling that the party probably hasn’t changed much after all, as the Sweden Democrats still have outright attack dogs in their party leadership.

KG Bergström and Lena Mellin, two big beasts of Swedish journalism arrived late to the briefing and were shocked at being forced to stand after no younger (but early arriving journalists) agreed to give up their seats.

Overheard from high-ranking Sweden Democrat: “The Sweden Democrats are not evil people that want to torture journalists” … commenting on the high temperatures and cramped briefing room. According to the person “we thought of another room but Säpo vetoed it.

Outside where Åkesson and Söder took questions, there was a car parked with an open boot revealing several cases of beer and a plenty of bag-in-a box wine.

If anything, this is clearly a sign that party is now a part of the political establishment. After all, all political parties party after their party leader’s speech, and they do it hard.